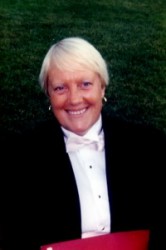 Jan Carter is an American composer whose body of work is matched only by the depth of her character and intellect. Born in 1951, Jan learned to play the piano at the age of four, when her grandfather, Wallace E. Broberg put her tiny hands on his while he played. She learned and practiced by ear, not learning to read music until many years later. It was clear from the start that Jan had a natural talent for music—an innate intuition and perfect sense of pitch—that led her teachers to believe she played more like an adult than a child.

In her early years, Jan studied piano formally with concert pianist Ruth Stevens. Under the tutelage of Dr. Jocelyn Jensen, a professor at The University of Nevada Las Vegas, Jan studied more than just piano. Dr. Jensen taught her music theory, musical dictation, and Bach analysis. She continued her study of Bach analysis with Howard Gardner.

By the age of fourteen, Jan knew that music was what her life was meant to be about. Musical studies, and her thirst for knowledge, so consumed her that Jan says she feared she was an idiot savant. She had the uncanny ability to play just about any piece of music after simply hearing it—a talent she kept to herself, afraid that she wasn’t normal.

During high school, Jan branched out musically, studying string bass with John Mulvehill and Ennio Bolognini in Las Vegas. Eventually, she joined the UNLV Symphony, as a high schooler. She even studied guitar with the legendary Brazilian musician Joao Donato.

In 10th grade, Jan was chosen from thousands of high school musicians to play with the Las Vegas Ambassadors—a well-known orchestra conducted by Norman Kaye, of the Mary Kaye Trio. She performed instrumentally, vocally, and as a soloist with the Ambassadors.

After graduating from high school a year and a half early, Jan continued to play and study music. She studied voice under Betty Jeanne Chipman, and continued to play string bass, as well as classical and Brazilian guitar with various ensembles and symphonies. She was asked to perform with the Utah Symphony many times, sang in Madrigal groups, and spent three months touring Europe with a forty voice a capella choir, performing at ever major cathedral in seventeen countries and in nine different languages. The choir was directed by Newell Waite, as well as Gerald Ottley, former director of The Mormon Tabernacle Choir.

Jan then moved to Los Angeles, where she was asked to collaborate with ASCAP lyricist Oleg Lopatin—a writer who worked with many recording artists, including Johnny Mathis. Jan wrote music to Lopatin’s lyrics, and orchestrated his songs as well. In 1977, with Lopatin’s assistance in her submission, Jan was elected to ASCAP herself.

After her stint in Los Angeles, Jan decided to continue her formal education, and was awarded a scholarship to Dartmouth College, in New Hampshire. As an undergraduate, Jan studied Film, Film Music, and Psychology, while continuing to play string bass and singing in a Madrigal group. She then stayed on at Dartmouth to earn her Master’s Degree in Psychology, and later, earned a degree in Clinical Psychology from Harvard University. It was during college that Jan was given the chance to study Bach analysis, music theory, and counter point with Professor H. Gardner, a former pupil of the renowned Madame Nadia Boulanger of Paris.

It was this balance of prodigal musical ability, and a depth of understanding of the human psyche, that came to define Jan’s career. While working as a clinical psychotherapist, and raising two sons, the music in Jan’s head and blood never went quiet.

In 1999, Jan went back to school yet again, at Oxford University, where she focused on Music Composition and Conducting in earnest with esteemed choral director Edward Higginbottom. Two years later, at The Sundance Film Festival, Jan hooked up with Little Voice Productions, a not-for-profit film production company, whose socially conscious work spoke to her. Jan went on to compose three documentary scores for Little Voice: Sweet Ambition, Swift Justice, and Haiti: Small Miracles.

Jan was enamored with composing film scores—the power of her music to elevate the images onscreen emotionally, to inspire a deeper connection between the audience and the scenes unfolding before them. As a psychotherapist, and accomplished musical scholar, film scores seem to Jan the ultimate opportunity to make an impact: socially, emotionally, musically, and personally.

Jan Carter resides outside of Portland Maine, on a six-acre plot of woods and fields with a working apple and pear orchard. An historic  traditional Cape farmhouse built in 1723, has been on the Historical Register, as it once it was a house used on The Slave Railway to hide and harbor slaves who had escaped from the south. Two grown sons, Morgan and Nathaniel, reside in California. Two collies and three Maine Coon Cats live in the Maine home and are enjoying life fully.

Blessed with the best friends in the world, she is grateful for the love of wonderful people in her life and comes from a large family. The eldest of five children, she is the only daughter and the only one who resides outside of Utah.

Most of her best work though, according to her, is written at her second  home  that is perched high atop huge red cliffs overlooking the Bay of Fundy in Nova Scotia, Canada.

She continues to compose scores for film and television, as well as works for orchestras and choirs around the world; she has also stepped in as a guest conductor for several orchestral and chamber groups. Her choral pieces continue to be performed by top university choirs, at home and abroad.

Now working for Mayan Films Ltd. in London and Poland, she is thrilled to be working as their  Producer/Composer-Filmscorer/Editor/Performer. She has brought along with her a cherished colleague Michael Percy Albert, also from Portland, Maine. He is a professor of music at Colby College with whom she has enjoyed a magical collaboration for over ten years.  A gifted musician, Michael is a much sought-after violinist and oboist and composes as well. His talents are endless and they work together as a close team.