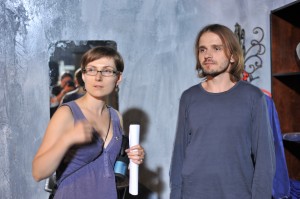 “The Man With The Spying Glass” our latest short film has been accepted to Jaipur International Film Festival that takes place in Jaipur in India between 27-30 Jan. 2011

Placit lives in a dreamless society created by his father, governed by multinational corporations. Placit’s most cherished dream is to be a puppeteer, something he has desired to do since he was a child.
However, Placit’s cynical self and fears preclude him from following his deepest desires. Until one day on his way to work, Placit finds a puppet’s head in a drain pipe. That evening he receives a telephone call and is invited to perform in one of the underground theatres. He accepts. His cynical self begins a war from within, playing upon his worst fears and self-doubt. Thankfully, Placit discovers on the back of an old photograph a tender note from his mother, urging him to seek happiness.
Will Placit be able to find enough strength to go against his cynical self and his father’s system to pursue his dream?