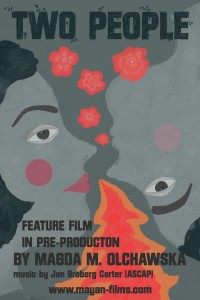 We are looking for a rock, grunge or jazz band which would like to include their songs in our feature film “Two People”.

The two main characters, Maggie and Patrick, met 10 years ago while studying at university. There they would bump into each other on numerous occasions despite the fact that they didn’t study the same subject or even share many of the same friends. As their paths continually crossed,a somewhat obvious, playful interaction began. Initial attraction was somewhat evident and interesting, but Maggie pulled away quickly to prevent herself from falling for Patrick.

After graduation, they didn’t see each other again for several years until one evening, they end up in the same bar. After spending a romantic night with Maggie, Patrick hopes and believes that the two of them could finally be together. However, for Maggie, it was just night full of passion, and she pulls away once again.

Maggie is trying to get her life back together after the ordeal she has been through recently. She married and had twins, a boy and a girl. Sadly, her daughter died in a fire while her husband was having sex with another woman and was away from the house, leaving the kids’ home alone when disaster ensued.

Patrick’s life revolves around work. He is an extremely successful executive of a large corporation. Even with his success, he had been unable to get Maggie out of his mind despite the passing years. Instead, he embarked upon a series of meaningless relationships.

Maggie is a respected, well-known journalist who is concerned with social issues. Maggie’s working life is at it’s peak.  Her book being published, and she has been offered a job to travel to Rwanda to write about the changes and upheaval taking place in that country.

Thoughts of Maggie continue to fuel Patrick’s quest to see her yet again, and with unbridled faith on his side, it   feels like the universe is still conspiring to bring them together. How is it that with regularity, they still cross each other’s paths and inevitably end up at the same places together at the same times? Their meetings by chance seem to indicate otherwise.